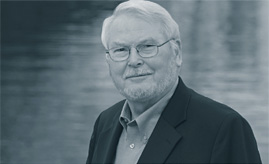 My purpose is in supporting others to create and live a meaningful life.

Joff Grohne is by nature the ”exploring type” and has enjoyed his involvement with people and the dynamics of “business” during his wide-ranging and rewarding career.

Joff was born, raised and educated in Germany. He worked in Brussels, Munich and Dublin before immigrating to Canada in 1970. A year later, together with his brother, he founded Karo Group Inc., a design and branding company.

Following the success of Karo in Vancouver, Joff launched Karo in Calgary in 1976. In the nineties, Joff sold his interest in both companies to senior staff members and facilitated the ownership transition in his role as Chairman until his retirement in 2001.

In 1996, Joff Grohne was appointed as Chair of TEC 232. TEC (The Executive Committee) is the world’s leading CEO member organization. (Canada:www.tec-canada.com, International: www.vistage.com.)

Joff was recognized five times for his Chair Excellence and was honored in 2005 to receive, as the first Canadian TEC Chair, the respected Robert Nourse Award. During his 15 year tenure with TEC and around 2,000 hours of coaching, Joff has observed what it really takes to be a successful CEO and the challenges of living a balanced life.

It was in his later years, that Joff has gained clarity of his core purpose in life, which is in supporting others to create and live a meaningful life.

Joff is married to Patricia and is the father of three grown up sons.